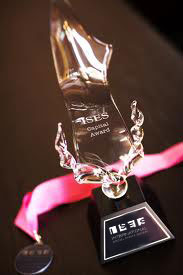 The 17th Annual Capital Awards Gala was held this past Sunday at the Gannett/USA Today Headquarters.  This ISES (International Special Events Society) Gala is held each year to honor the “best of the best” of more than 400 of the Washington DC area’s most prominent and influential event industry professionals, planners and vendors.  In addition to live music, great food, networking and an after party in an upscale lounge, the highlight of the evening was the awards ceremony in which 64 award nominees competed for the prestigious Capital Awards.  After an extensive submission and anonymous judging process Entertainment Exchange was honored with the following nominations and/or awards for events that we were fortunate enough to produce over the last year:

Thanks to everyone at ISES for putting on this spectacular event and to the judges for honoring us with the recognition to be considered among the best in DC!