Grammy-nominated musician Chris Lewis has a passion for music and helping make dreams come true. As a part of the DC Synergy band, he has the opportunity to combine both passions every time a couple says “I do”.

We connected with Chris for a short Q&A: 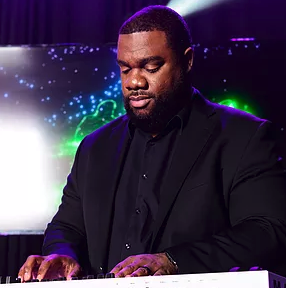 1. Tell us about your experience in the music business?

I’ve been playing piano since the age of two, and I started learning music production when I was 15. I didn’t break into the music industry, however, until I 2004 when I started working with StarMakers Productions, with whom I am still affiliated today.

2. When/ how many/ which artists/ which songs got you the Grammy nominations?

3. What was it like to win a Grammy nomination?

It’s always a great feeling to find out you’ve been nominated for a Grammy. Realizing that the work that I do, that I pour my heart and soul into, is touching that many people—it’s hard to explain but the feeling is phenomenal.

4. Why do you like performing with Entertainment Exchange band DC Synergy?

The best part is the fact that these brides, grooms and families have entrusted us to help turn this once-in-a-lifetime event for them into something that they’ll remember forever. Also, with us being one of the smaller bands in the agency, DC Synergy has always been a tight-knit family. We’re always joking around, or bouncing ideas off of each other on how to improve the shows, or even celebrating life achievements outside of the band. It’s impossible to think of my band mates as merely “co-workers.”

5. What other artists have you worked with in the past?

6. Goals for the future?

To turn some of those Grammy Nominations into WINS!