Skip to content
Mariachi Musicos
Write a review Review
Info Audio Photos
They came together in the Washington, DC area to play the traditional and popular music typical of the Mexican Mariachi ensemble. The members today still perform in both bands depending on availability and performance scheduling.

Mariachi music originated in west central Mexico, and today is usually identified with the region in and around the city of Guadalajara in the Mexican state of Jalisco. Since the 1930s, it has been one of the most popular folk-based music genres in all of Mexico, the southwestern United States, and beyond. Musica rachera (Iiterally, “country music”) evokes a passionate and at times vigorous home-grown, country perspective on life. At the same time, Mariachi music typically includes in its repertoire sophisticated arrangements in a contemporary musical idiom appealing to modern urban tastes.

Mariachi Musicos has performed at many of the Smithsonian Museums, the Organization of American States, dozens of federal agencies, the DC and Baltimore Hispanic Festivals, and hundreds of community and private events. The groups individually have toured many states along the eastern seaboard including Rhode Island, Massachusetts, New York, Pennsylvania, Tennessee, Georgia, West Virginia, North Carolina and South Carolina.
Track 1
Track 5 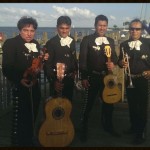