Skip to content
Karla Chisholm
 (7)
Write a review Review
Video Info Audio Photos Songlists
The sound of her voice is full of delicious contrasts. It’s strong and strident, but soft and smooth as caramel when it drops down to the breathy low register. She pulls dead-accurate notes seemingly out of thin air, the way Ella did, but then she’ll swing breezily into soul mode, bending and smearing blue notes so naturally you think you’re hearing Aretha.
And then there’s seeing Karla Chisholm live — a whole different story. A lithe, slender girl in a cocktail dress with an adorable pixie hairdo, belting out standards and jazzed-up soul covers with such aplomb, such strength, that it almost seems unreal. Karla can channel Dinah Washington in one tune, then Mavis Staples in the next, then the breezy lightness of the Andrews Sisters in the next.

Take the cover of Bobby Hebb’s 1966 hit “Sunny,” from Karla’s debut album, Live at Domenica’s, released in 2009 as the culmination of a long-running Washington DC Saturday night gig. Backed by the sparse, virtuosic guitar of Michael Raitzyk, Karla’s voice shines with confidence, moving from delicate crooning to blues diva to bebop scat-singing totally effortlessly. Or her version of “Beginning to See the Light.” This isn’t your average Tony Bennett-style Vegas treatment of a classic swing ballad. It’s a girl bringing all the weight of her life experience, charged with the same crazy beams of infectious enthusiasm that give light to her personality, to a song that’s been worked over by every heavyweight lounge singer in history. Somehow, she makes it entirely her own.

A charming Southern Belle in both manner and spirit, Karla was born and raised in Dallas, Texas, and studied vocal performance at the storied music program at the University of North Texas. After stints in Washington and Los Angeles, she now makes her home on the west side of Baltimore, not far from the old vaudeville theaters and chitlin circuit clubs where Billy Holiday cadged drinks from lovestruck hustlers and sang her soul out to the salty-aired night. Karla plays gigs all over the Baltimore-Washington area, including spots with musicians who regularly round out sessions with the likes of Prince, Justin Timberlake, Al Dimeola, Bebe Wynans and Eva Cassidy. At 18, Karla debuted at Switzerland’s famous Montreux Jazz Festival. In 2009, she shared a stage with Mary Wilson of the Supremes. She has toured in the Greek Isles and Dubai, but feels just as comfortable reinvigorating the standards in front of a hometown crowd at Baltimore’s Federal Hill Jazz and Blues Festival.

“Sometimes it amazes me how strong the power of love can be,” Karla sang one night recently at a lounge gig in Baltimore. She’s covering Tuck and Patti’s “Takes My Breath Away,” and the crowd clearly doesn’t know the song. But you can see them slowly turning towards the stage. Karla closes her eyes, throws her head back, and belts out the refrain. Suddenly it’s clear. It takes a woman who knows the power of love, who’s experienced it first-hand, to sing like this. It takes someone who’s equally conversant in roadhouse blues numbers and Smokey Robinson oldies to move so easily between the thrall of love and the pain of loss, all in the course of one song, the way Karla does.

So sit back and relax and just listen. Karla Chisholm has got some things she’d like to whisper in your ear. She’s also got some flirty, almost naughty things she’d like to tell you with eyes. And some heartbreaking stories she wants to tell you, in a voice that’s halfway between a conservatory-trained, honey-sweet alto and a roadhouse groan. Sit back and listen. You won’t be disappointed.
Karla Chisholm
Day in the Life
Live at the Museum
Pennies From Heaven
Devil May Care
Had To Be You
Tracks of My Tears
Takes My Breath Away
Sunny
Way You Look Tonight 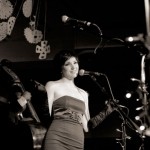 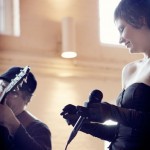 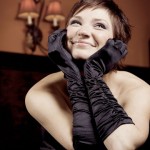 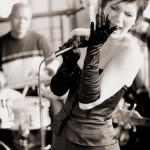 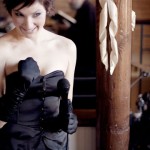